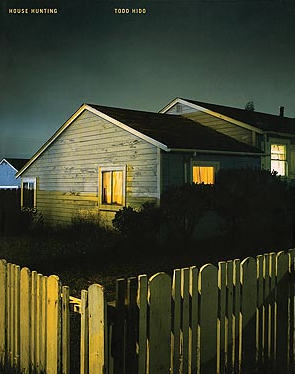 Todd Hido's large color photographs of suburbia are lonely, forlorn, mysterious... and strangely comforting. Hido photographs the interior rooms of repossessed tract homes, and the outsides of similar houses at night whose habitation is suggested by the glow of a television set or unseen overhead bulb. Seldom does the similar evoke such melancholy. Yet rather than passing judgment on his anonymous subjects, Hido manages to turn the banal into something beautiful, imbuing his prints of interiors with soft pastels, and allowing the exteriors to glow in the cool evening air.